Pablo Martínez co-founded NRMAL in 2007. It originally took place in his hometown of Monterrey, but the festival, then called Festival NRMAL, relocated to Mexico City in 2015. I first met him in 2017, when I was in Mexico City to interview cultural creators working across different vocations—an artist, a curator, a book collector, a photographer, a musician.

For our conversation at that time, we put out a tweet telling folks that we'd be sitting together at Parque México and talking at 3:30pm local time, and to feel free to join us if you wanted (we provided a map). A group of people came and the conversation was fun, with a lot of questions coming from those in attendance.

That entire time, I was struck by Pablo's calm demeanor—something essential for a person running a large-scale festival. I was also struck by the purity of his vision, and his ethical approach to something that could easily and quickly become unethical (see, for instance, Coachella).

Five years later, NRMAL has continued to flourish. The organization is currently two full-time staff with a group of friends of the project as advisors, and Pablo is armed with even more wisdom about running collective projects (and the same preternaturally relaxed demeanor).

Can you tell me the history of NRMAL? When did it start? How did you start it?

My friend and artist Lucas Cantú and I met in high school and instantly developed a common interest for the arts. We shared a mutual interest for architecture, design, raves, clubbing, street art, travel and music. One thing led to another and we started putting out happenings to bring together like-minded people.

NRMAL was born in 2007 in the city of Monterrey, Mexico out of a need to be part of a flourishing community of people that celebrated emerging art, music, and other cultural expressions. Eventually, we grew to become a music festival that relocated to Mexico City and still supports talent outside the mainstream.

Today NRMAL has the highest female representation (50%+) in Latin America’s festival circuit and is committed to equating Latin American artists with that of their Anglo-European contemporaries. Many of these artists play for the first time in the region.

Artists such as Mac DeMarco, Grimes, Psychic TV, and Death Grips have played next to their Latin-American contemporaries such as Juana Molina, Lorelle Meets the Obsolete, Buscabulla and Föllakzoid.

Was there a first action or artifact you were inspired to create?

The first event was a club party at an unusual underground place in downtown Monterrey. We printed a beautiful flyer commissioned to Blast, a designer and street artist. And the electronic producer Pier Bucci was our main act.

Can you describe how you work together now as a group?  How has that changed over the years?

We are a small group of people with different backgrounds and expertise that love the arts and love putting out a festival together.

Currently, I am the director and I make decisions with input from the group. My role consists of holding and sharing a vision for NRMAL with current and potential collaborators and to ensure everyone is doing what they love and are best at.

Do other people have defined roles? Is it all collaborative?

Currently we are experimenting with the concept of “liquid super teams." People with different areas of expertise that don’t have to be full time staff but bring a lot of value.
So I would say we are an expertise based collaborative group guided by a purpose.

Looking back, were there any key decisions you made — knowingly or not — early on that have gone on to especially shape this project?

The most significant decision has been deciding to be a startup for culture rather than a for-profit maximizer at all costs.

For you, what does it mean to be a start-up for culture?

Yancey uses this term to describe Metalabels and I love it.  Startups for culture have values different other than making profits at all costs. The intention is for the project to be sustainable and profitable without killing its soul.

How has that guided you/resulted in different decisions?

In the past we’ve struggled making decisions that seem to be profitable but don’t align to our purpose.  We’ve learned to become more and more attuned to our purpose.  Talking to other likeminded collectives (the metalabel community) has been really helpful in knowing we are not alone in this journey.

Does your project have a mission statement? Is there something written down for you or for others that explains what you’re doing or sets an intention about its goals?

“NRMAL is a metalabel that releases an annual festival with the purpose of bringing emerging art, music, and culture to our community. We believe emerging cultural expressions are essential for independent thinking, innovation, and self-expression, thus resulting in a more conscious world.”

Established in 2007, NRMAL is an arts presenter and annual festival dedicated to supporting art and music that exists outside of the mainstream with a focus on promoting Latin American music. Over its 10+ years in existence, the organization has grown to become one of Mexico and Latin America’s most-beloved experimental arts presenters and a launchpad for many artists. Originally based in Monterrey, NRMAL relocated to Mexico City in 2015, expanding into a bigger locale and larger productions as it simultaneously grew its reputation as an important culture-maker and champion of challenging and inspiring art. The group’s approach focuses on achieving sustainable growth by reflecting and meeting the needs of its artistic and audience community, rather than chasing expansion for expansion’s sake. Especially notable is NRMAL’s commitment to producing its flagship annual festival without heavy reliance on excessive corporate brand partnerships. This approach has paid dividends, enabling the organization to attract a strong and loyal community of supporters, while also allowing it to stay independent and avoid the need to cater to external forces in its programming. NRMAL is also well known for its commitment to championing diversity across sounds, geographies, gender, and more, with its core team recognizing the many inequities that exist in the music and art worlds, and moving purposefully to make these industries better through more representative programming.

To showcase and present diverse experimental and independent music and art through an annual festival with an explicit focus on fostering a thriving artistic community and championing the Latin American underground.

How do you define success and what's not as successful? What’s most important?

Success is the coming together of our community for a greater purpose than ourselves manifesting in a collective creative intelligence that wouldn't be possible otherwise.

What tools do you use in your work?

Listening is our most powerful tool for conflict resolution, connection, and trust. This guide by Matt Mochary has been helpful. (Heard: how to make people feel it)

Are there other projects or people whose work you admire and informs how you think about what you’re doing?

Larry Harvey, the founder of Burning Man, is definitely an inspiration. (Larry Harvey: The Mind Under the Hat)

The Metalabel Discord is an inspiring community of fellow cultural pioneers pushing boundaries.

Desolation Center, an independent music and performing arts organization and documentary that tells the story of a group of 1980s punk artists who started organizing and playing desert shows that later inspired Burning Man, Coachella, and Lollapalooza. (Desolation Center)

"Success is the coming together of our community for a greater purpose than ourselves manifesting in a collective creative intelligence that wouldn't be possible otherwise. "

How do you finance the festival?

I won’t say it’s been easy being a startup for culture. Ticket pre-sales and sponsors have been our sources of finance.

Earlier we had a design studio that helped us pay the rent.

What have been moments of yours that have most clicked for you, for your audience, or with the public in some way?

Juana Molina’s performance at the festival was a definite moment. She tore the stage. A symbolic moment for all of us present. A female Latin American artist closing the festival and putting us all on our heads.

If I ask you to think about the highest high in the life of this project, is there a moment that jumps out?

2012 was an inspiring year, the coming together of the Brooklyn D.I.Y. scene with that of Latin-American. Artists such as Unknown Mortal Orchestra, DIIV, Friends, and Liturgy played next to Astro, Davila 666, Bam Bam, and Juan Cirerol. 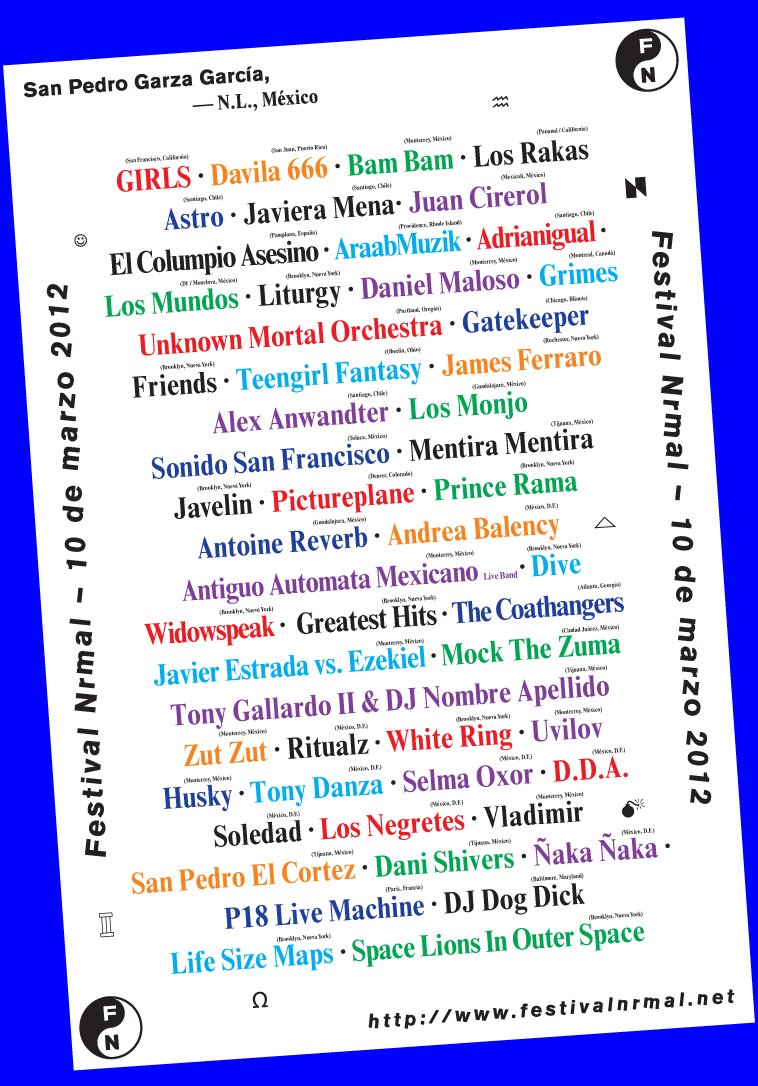 If I ask you to think about the lowest low in the life of this project, is there a moment that jumps out?

The lowest low was when my original partners and I decided to part ways.

You have ethics and honesty built into what you do. How has that helped, or hurt, the festival?

We might not be the biggest community or the most profitable business but time will tell if we made a difference.

Last question. Please complete this sentence: "Doing it all over again, I would _______."

Stress less. But overall, I can say I have done the best I could, I have no regrets.

How culture is made